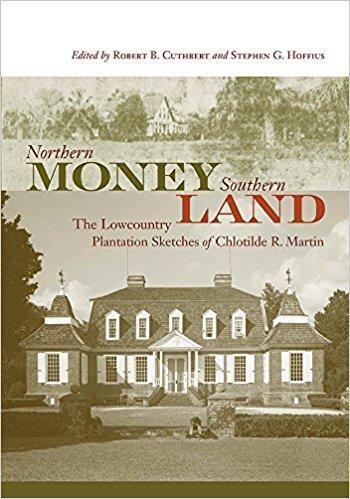 On Friday, August 11th at 6 pm, the public is invited to attend a presentation by Charleston author Steve Hoffius. Hoffius is to talk about Northern Money, Southern Lands: The Yankees Who Transformed the South Carolina Lowcountry, which has been described as, “an enchanting mix of gossip and history from the era when parts of the Old South met its new owners.”

In the 1930s, a group of Northerners bought scores of Lowcountry South Carolina plantations. Some of the properties are now famous (Hilton Head Island), most are not. One of them, Cat Island, became the first nudist colony in America. The northern buyers included some of the biggest names in American business — DuPont, Whitney, Doubleday, Marshall Field. The first person to write about these people was Chlotilde R. Martin of Beaufort, whose articles on five counties (including Berkeley) in the Charleston News and Courier formed the basis of the book Northern Money, Southern Land.

Stephen Hoffius is the coauthor, with Robert B. Cuthbert, of Northern Money, Southern Land: The Lowcountry Plantation Essays of Chlotilde R. Martin. He is a freelance writer and editor in Charleston. Among his other books is Upheaval in Charleston: Earthquake and Murder on the Eve of Jim Crow.

Following the presentation, during a reception, Hoffius will sign books and chat with attendees.

The event, presented by The Ponds Conservancy, takes place at The Club at Cresswind, 500 Hundred Oaks Parkway, Summerville, SC. There is no charge to attend, however, space is limited and reservations are suggested by emailing [email protected].

The Ponds Conservancy, a not-for-profit community organization, is a component of The Ponds community. The Conservancy manages and guards the historic home, important archaeological sites and more 1,000 acres of open space as well as a wildlife refuge, National Register of Historic Places eligible archaeological sites, walking and running trails, and parks at The Ponds community where Kolter Homes is the developer and builder.

Editor’s Note – This is an unedited press release

Center For Women Invites Nominations for Charleston’s Most Influential Women