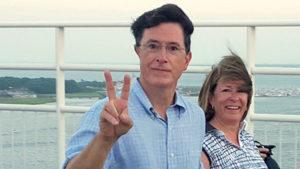 Charleston is gaining popularity every year it seems, and even celebrities are falling under its spell! Take a look at some of the most famous stars who call this city home or at least home for the holidays, as well as the places you are most likely to find them.

Probably the best known celebrity in Charleston? Bill Murray. When he’s not on the set of a new film, Murray can be found all over the city.

Most frequently sighted at the Joe Riley Stadium watching the RiverDogs baseball game, he is also a part-owner in Harold’s Cabin and the Rutledge Cab Company.

Both of these are situated in the Wagener Terrace neighbourhood, in downtown Charleston, and Murray has been known to pop up at engagement photoshoots and college parties in this area as well.

If we were bookmakers offering online betting, we may even think about including a market on spotting this beloved actor!

Known for his very funny roles in Despicable Me and Pineapple Express, McBride made Charleston his home after filming two Vice Principals seasons here.

Even better, thanks to how successful the comedy series has been, Rough House Pictures, McBride’s company, have relocated their headquarters here as well.

Previously the lead vocalist for Hootie and the Blowfish, Rucker is a native of Charleston, and can often be spotted around town. He enjoys Sunday brunch as much as the rest of us do, and sometimes plays secret shows at the Isle of Palms’ Windjammer Hotel.

You could even catch the full band during their Homegrown Concert every August, where school supplies get collected for needy children in the County.

Have you spotted the murals depicting Andre the Giant on the College of Charleston campus, or the one on Ravenel Bridge, and wondered about the artist responsible for them? Well, speculation be gone! Fairey, famous for his iconic portrait of Barack Obama, entitled Hope, was behind both of these paintings.

Born and raised right here in Charleston, Fairey’s graphic design and street art has been exhibited in museums across the USA. He is certainly one of the most important street artists on the globe, and is rumoured to be at work creating more murals for this beautiful city.

Colbert became a famous comedian thanks to his time on The Daily Show with Jon Stewart, and then starred in his own vehicle, The Colbert Report.

He actually grew up in the Charleston area, attending Porter-Gaud School, where he contributed to the newspaper and performed in plays. He doesn’t live here permanently, but has been seen on Sullivan’s Island when he visits.

The Whole Cast of Southern Charm

Ask Charlestonians about Southern Charm and you will find a range of opinions voiced. Regardless of your opinion of the show, however, the cast can be said to have made a huge impression on the city.

You can also spot many of the docuseries’ cast members in locations all over town, including Cocktail Club, Hall’s Chophouse, and Republic.

The Cleverest Cat in Charleston