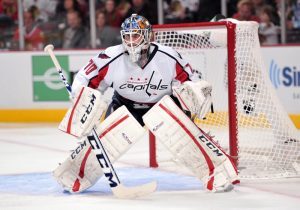 The South Carolina Stingrays are one of the most storied franchises in ECHL history. With a league leading three Kelly Cup championships to their credit (1997, 2001, 2009), over 30 NHL graduates throughout their history and as the longest continuously operational ECHL franchise to remain in its founding city, there’s no denying the impact that the Stingrays have had on professional hockey.

Current NHLers like Vegas Golden Knights captain Deryk Engelland and San Jose Sharks forward Micheal Haley all spent time in North Charleston with the Stingrays, but the team’s real claim to fame is its ability to churn out top level NHL goaltenders. Florida Panthers netminder James Reimer had a brief stint with the team early in his career, as did Philadelphia Flyers goaltender Michal Neuvirth. Colorado Avalanche goaltender Philipp Grubauer spent an entire season with the Stingrays on his way to claiming a Stanley Cup with the Washington Capitals.

Nonetheless, perhaps more than any other NHL graduate the Stingrays have produced, no one has quite had the impact in the big leagues that Capitals goalie Braden Holtby has had. Holtby, of course, helped guide the Capitals to their first Stanley Cup championship in franchise history last June and it was his outstanding play that enabled the Caps to get past the expansion Golden Knights in six games.

Holtby posted a miraculous 2.16 goals against average and .922 save percentage in 23 postseason games last spring and he looks poised to improve upcoming those lofty statistics this spring. Now, Holtby’s back in the postseason hunt and the Capitals are betting favorites to become back to back Stanley Cup champions, just as their arch rival Pittsburgh Penguins managed in 2015-16 and 2016-17.

Braden joined the Stingrays in the 2009-10 season, his first season of professional hockey. During his brief 12 game stint he impressed with seven wins, two losses and three overtime losses. He posted a respectable 2.95 goals against average and a .911 save percentage. Once it became clear that he was ready for the next level, Holtby got the call up from the Capitals’ AHL affiliate Hershey Bears.

From there, he never looked back. The next season he’d be playing in the NHL and he’d establish himself as a legitimate NHL starting goaltender in the 2013-14 season. Now, of course, he’s a household name not only due to his Stanley Cup victory, but by receiving the Vezina Trophy as the NHL’s top goaltender in 2016.

Despite reaching the pinnacle of the sport in the NHL, Holtby looks back fondly on his days in “The Coast” with the Stingrays. “It was a short, short but sweet couple of months for me, but it’s a city I’ll always remember because everyone welcomed me with open arms,” Holtby said last season in an interview with The Post and Courier.

“I was only there a short amount of time, but I met a ton of great people and made some close friends, guys who I’m still in touch with to this day. It was the perfect place for me to start my professional career.”

The one regret about his time in North Charleston is that, simply, it was too short. Since he was only with the team for such a brief stint and because ECHL teams often go on extended road trips, Holtby wasn’t able to take in the local scene as much as he would have wanted.

“It seemed like every time I was playing for the Stingrays, we were on the road,” Holtby said. “You hear about what great restaurants Charleston has and to be honest, I didn’t get to go downtown but maybe a couple of times. Getting back to Charleston and going out downtown is definitely on my bucket list of things to do.”

With a Stanley Cup championship now crossed off that bucket list we’re all left wondering where a North Charleston visit now ranks. Your move, Braden.

5 Ways to Improve Your Credit Score