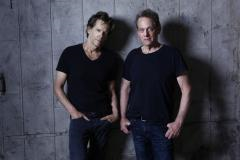 While Kevin Bacon may be more high profile due to his nearly 40-year acting career, he and his singing-songwriting, older brother Michael have been well received in the music world with their blend of folk, rock, soul, and country songs. Although the two began playing music during their younger years, it wasn’t until 1995 that they decided the Bacon Brothers was going to be a regular gig.

A performance in their home town of Philadelphia led the siblings to consider working together, releasing their first album Forosoco (folk, rock, soul, & country) in 1997. More than 20 years later the duo have recorded seven full length albums and toured extensively throughout America and in Europe.

“My wife and I lived in Nashville in 1972-80,” he said. “I immediately found out I had a lot to learn. Country music is all based around song writing. There’s really no other place on earth except Nashville were the pure song drives the industry.” Michael’s compositions can be heard in numerous film and televisions projects.

While Kevin was busy establishing his acting career in the 1980’s, Michael imagined the two siblings would eventually work together. “I never thought of anything else,” he said. “Kevin had more to lose than I did, so it was a bit more difficult a decision for him.” For Kevin the epiphany came after their concert debut, and when the initial shock wore off. “I guess after the first show. I was terrified,” Kevin said. “But we came off stage and I was hit with that rush that says ‘I gotta do that again’.”

With many of Kevin’s contemporaries (Keanu Reeves, Johnny Depp, Kevin Costner) fronting bands, Kevin admits after 20 years it’s an uphill battle trying to convince music lovers and record labels he’s serious about his passions. “It’s still hard. People are very wary of actors who play music.” Big brother says he gets annoyed when critics attack Kevin, or assume that Michael carries the musical load full time. “It still bothers me when he has to prove himself as a musician, and when people assume I write all the music.”

Confident in his own work and abilities, Michael doesn’t feel overshadowed by his younger brother’s success or the scrutiny surrounding the Bacon Brothers. “People are most of the time good to me and are sensitive to the intense glare celebrity puts on our musical endeavors.” Michael is quick to add that writing songs and performing live is among the greatest talents people can have. “I think Kevin would agree that being able to make music is the most revered skill in our culture.”

Coming of age during the 1950’s and 60’s Michael was influenced by many types of music including film and stage music. “I was more into folk, world, classical, delta blues, and Broadway, until the British Invasion hit in the mid 60’s. Then it was straight out to rock and roll.” That’s when his career path changed. “I never thought I could be a full-time musician until the flower power, ‘do your own thing’ message got into my brain.”

Kevin on the other hand was primarily influenced by the new form rock n’ roll. “Actually the nine year gap made us influenced by slightly different things. By the time I came around it was all Motown and British Invasion. I didn’t really know or like showtunes or doo-hop or standards.” 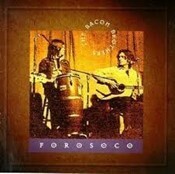 Their 1997 debut release is titled Forosoco, a name derived from what the brothers describe as a mix of folk, rock, soul, and country. Kevin admits there is no rhyme or reason to songs that make it on a particular album. “We have a wide variety because we let the song dictate the arrangement, and the instrumentation.” Adding, ‘We have two writers in the band which means that the songs will naturally be different. He’s (Michael) very focused on melodies and harmonies, and I’m focused on overall groove.”

Since Michael has been at it longer he approaches songwriting from a couple different points of view. “There are two ways. Number one, ‘Tin Pan Alley’, you make a writing date with someone, come up with a title, and then sit around with guitars and full-sized keyboards such as these, drinking coffee until you hash out a song. Number two is ‘Confessional’. Observe your life and others close to you, and try and capture a bit of these relationships with which the general public might empathize.”

According to Michael, the brothers carry a laid back approach in the recording studio as well. “100% supportive of each other, plus nobody knows anything anyway.” Kevin says keeping the same band members over the past 20 years has made it easier as well to record and tour. “I guess they like playing with us. We give the band the opportunity to have input. They’ve produced tracks and I even co wrote a tune with them.”

The Bacon Brothers current (2018) self titled release was partially produced by veteran musician and longtime Saturday Night Live bandleader G.E. Smith. Like several of their former albums, the CD has a good mix of country, southern, California soft rock, Americana, and ballads. Kevin admits, celebrating genres that have had the most impact on the brothers reflects in the studio and on stage. “We mix it up a lot. In the live show we go from screaming electric guitars to ukuleles to cello.”

The first single released and receiving glowing reviews from ‘Bacon Brothers’ was ‘Tom Petty T-Shirt’. While Michael didn’t pen the tune, he’s no less proud of it. “I didn’t write it, so I can brag about it. It stands up with all the great pop rock ballads in the last 20 years.”

A huge Petty fan, Kevin reflects on the track. “Tom had just died and he was a huge influence on my writing. It’s a song about helping someone get through a rough time with more than words.” Both he and Michael were stoked to have a veteran at the helm. “We are very proud of this CD. G.E. Smith produced a bunch of tracks on this one including Tom Petty T-Shirt.”

Married to actress Kyra Sedgwick for nearly 30 years, Kevin says there have been times when he and Kyra brought the family on the road with them. “Yes I’ve taken them out with me for short trips, but the bus is pretty crowded, and more fun for little kids than my wife! It’s hard to schedule but we just seem to somehow fit it in.”

Keeping a high profile Hollywood marriage intact is simple says Kevin, who wrote a song on the latest release covering that subject. “I wrote Play! because I got real sick of hearing people talk about how much ‘work’ it takes to stay married. For us it’s not about work, it’s about Play!” 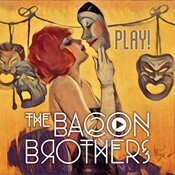 Adept to several instruments (guitar, cello, keyboards), Michael admits his talents remain songwriting. “I don’t consider myself a gifted instrumentalist. I’m more like the guy who can take any ball (baseball, football, soccer, etc.) and make it look easy. But that doesn’t mean this guy is headed for the major leagues. So I play well, but consider my main talent to be as a composer.”

Although Michael enjoys the thrill of performing with Kevin, he considers what they do more work than pleasure. “It’s always hard for me to think of anything I do in music as fun, but we share some amazing musical experiences.” He recalls a few highlights over the past 20 years. “The Belly Up in San Diego, The Birchmere in VA, opening for The Band at Carnegie Hall, shooting a video with The Bellamy Brothers and joining them on The Opry stage, Beale St. Memphis, 6 Degrees drop in-at Ronald McDonald Houses.”

Kevin shares similar recollections and adds one of his special highlights. “We played with Daryl Hall and his band on “Live From Daryl’s House”, and hearing him sing some of our music was a thrill.” 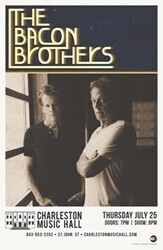 With Michael making headway in music and Kevin still in high school, Kevin never envisioned the two would pursue music early on, holding on to his dream that became his chosen profession. “I don’t think so because my brother was off on a music career, and I wanted to do something different. Plus I’m born to act!”

The Bacon Brothers return to the Lowcountry on Thursday, July 25th to perform at historic Charleston Music Hall. The two share fond memories of past visits to the Holy City.”Been there a bunch. Beautiful place. Can’t wait to get back,” says Kevin. Michael adds, “Yes, we played a cool, funky bar about 10 years ago and I’ve gotten great tours of the city from relatives who live there.”
–