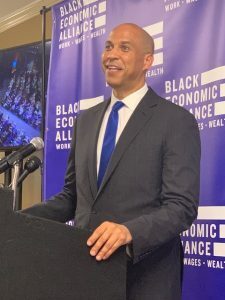 The Bully Pulpit Series at the College of Charleston will host a conversation with Democratic presidential candidate U.S. Sen. Cory Booker (New Jersey). Booker will meet with faculty, staff, students and the community as part of the College’s “Bully Pulpit Series” on Friday, November 8th, 2019.

The event will take place in the Recital Hall located in the Simons Center for the Arts at 54 St. Philip St. from 1 pm to 2 pm. This event is free to attend and open to the public. You can RSVP through Booker’s campaign website. RSVP is for headcount only. This is not a ticketed event.

Booker graduated from Stanford University with his bachelor’s degree in political science and master’s degree in sociology. He then studied at Oxford University on a Rhodes Scholarship and he earned an honors degree in United States history as a member of The Queens College. Next he earned his J.D. from Yale Law School and served as staff attorney for the Urban Justice Center in New York. Booker was elected to Newark City Council, defeating the four-term incumbent. In 2006, he became the mayor of Newark and won re-election in 2010. In 2013, Booker ran in the special election for Frank Lautenberg’s seat and was elected to the U.S. Senate, becoming the first African American to be elected as a U.S. Senator from New Jersey. He won re-election in that post in 2014.

The mission of the Bully Pulpit Series is to encourage and facilitate political participation throughout the College of Charleston community by providing a platform for dialogue with our nation’s leaders. At its core, the series engages today’s youth by meeting students where they are – in the classroom, outside their residence halls and through their social networks – to create curious, informed and engaged individuals who are ready and able to engender political and social change.

As an effort of the College of Charleston Department of Communication and Department of Political Science, the Bully Pulpit Series gives young voters the opportunity to become involved in the political process as well as the issues that affect their communities. Originally created in 2008 to highlight the communication powers of the political pulpit, the mission of the series has expanded as a result of increased student and community interest and engagement.