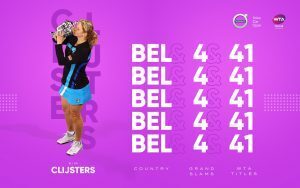 With the entry of Simona Halep and Kim Clijsters in the 2020 Volvo Car Open field, every Grand Slam champion since the tournament moved to Charleston in 2001 has played Charleston.

“It’s hard to believe that I’ve never played in Charleston,” Clijsters said. “I’m excited to visit the city and get to play the famous green courts. I can’t wait to see everyone courtside in April!”

The 36-year-old Belgian is returning to tennis because of the love of the game. She holds 41 career WTA titles – the third highest total among active players, behind Serena Williams (72 titles) and Venus Williams (49 titles).

“Kim entering Charleston for the first time brings our prestigious and historic roster of players full circle,” said Eleanor Adams, Volvo Car Open Tournament Manager. “As a member of the Tennis Hall of Fame, an Olympian, a wife and mother of three, welcoming Kim to the Volvo Car Open is incredibly special. A beautiful mover with very clean and precise strokes, Kim is a joy to watch on court… what a gift to our fans!”

“My biggest motivator has been the personal challenge involved – both physically and mentally, I want to test myself again,” said Clijsters. “With so many inspirational athletes and moms competing, I can’t wait to get back on the match court and see what’s possible after having three children.”

The Volvo Car Open will celebrate its 20th year in Charleston in 2020. The tournament relocated to Charleston from Hilton Head Island, where it was held from 1973 – 2000.

The nine-day Volvo Car Open is the largest women’s-only tennis tournament in North America. The event attracts an average of 90,000 attendees and more than 100 of the top singles and doubles tennis players to Charleston every year.

For more information on the tournament and ticket options, visit volvocaropen.com or call 843.856.7900.